This course requires a 2.7 version of Python. As you'll come to discover, using the right version of any software component is important. The application we build in this course will use several third-party packages. When these packages are created they are tested against specific versions of Python and other software components like Django. Using an untested version may cause immediate and obvious errors; other times errors will only occur in some situations. Therefore it's critical that every version of software you use is the correct version, starting with Python.

Install Python On a Mac

Below are the steps to install Python on a Mac.

Step 1: Verify Which Version of Python is Installed

To check which version of Python is installed open a terminal window by going into Spotlight (the magnifier in the upper right corner) and typing 'terminal'.

Once the terminal is open, type python into it. This will start the Python interpreter, which will also show you the version number. In the following example the Python version is 2.7.5.

If the version of Python on your computer is not in the 2.7.x range, then you need to install the correct version. Installing Python on a Mac can be tricky. If you perform a quick search on the web you'll see many blog posts and articles detailing different methods. One of the cleanest ways I've found is to use Macports, which is a package management system for the Mac that simplifies tasks like installation. In the following steps you'll download Macports and use it to get the proper version of Python.

These are the instructions for setting up a Windows development environment.

Step 1: Verify if Python is Installed

Windows does not come with Python pre-installed. However, there's a chance you've installed it in the past, or that a program you've used has installed it. Follow these steps to see if Python is installed (this will work on Windows 7 or 8; not sure about earlier versions).

If the right version of Python isn't installed, follow these procedures to install it.

When you run the Python installer, you'll come to a screen like the one shown below. Be sure to select the very last item in the list (Add python.exe to Path). 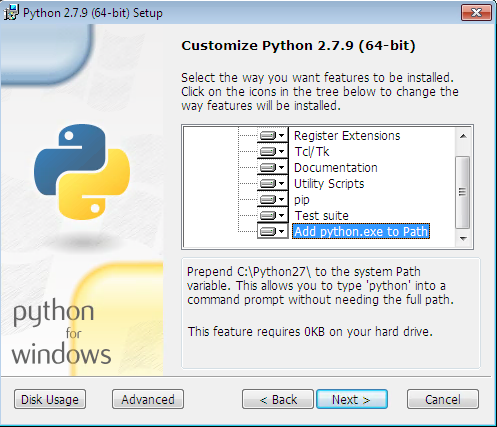 To verify Python can be accessed anywhere, close and reopen the Command Prompt. With a new prompt open type python. The Python interpreter should open.

Next Lesson
Track your progress with a free account